4.3.2 Isotopes
1. Isotopes are atoms of certain elements which have the same number of protons but different number of neutrons in the nucleus of the atoms. 4. In a neutral atom contains an equal number of protons and electrons.
5. Atoms of certain elements can be represented by the following symbol:


4.2 Structure of Atoms
Atoms
1. All matter consists of tiny units called atoms.
2. Atom is a basic unit of all matter.
4.2.1 Subatomic Particles
1. An atom is made up of particles that are even smaller called subatomic particles.
There are three types of subatomic particles, which are
(a)  Protons
(b)  Neutrons
(c)  Electrons Subatomic particles in an atom

Change in Heat and Kinetic Energy of Particles

1. The change in temperature will influences the kinetic energy or the speed of the motion of the particles.

4. The kinetic energy of the particles in a substance is directly proportional to the temperature of the substance.


Inter-conversion between States of Matter

Inter-conversion Between the 3 States of Matter
Matter exists in 3 states of matter, namely, solid state, liquid state and gaseous state.

Characteristics of Matter in Solid, Liquid and Gaseous State

States of Matter (solids, liquids and gases) | The Chemistry Journey | The Fuse School

In SPM, you need to know 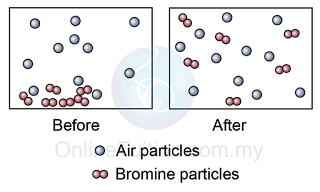 4. Diffusion occurs in solid, liquid and gas.
5. The rate of diffusion is highest in gas and lowest in solid.
6. Diffusion is the proof of the particle theory of matter.

Conclusion
The rate of diffusion is highest in gas and lowest in solid.


Video 3 - Diffusion in Liquid and Gas


Diffusion of Gases | The Fuse School

Changes in the State of Matter

1. Matter is anything that occupies space and has mass.

3. We can catagorise matter into 2 categories: element and compound.

5. Matter is made up of a large number of tiny and discrete particles. We can catagorise the particles into 3 categories: The atoms, the molecules and the ions.

6. Atom is the smallest, indivisible particle of an element. Atoms of the same element are exactly alike and are different from the atoms of all other elements.

The kinetic theory of matter explains the state of matter in solid, liquid and gaseous states based on the following assumptions:

1. Matter is made up of very small particles, each of which has a mass.

2. These molecules are in constant, random motion. The rapidly moving particles constantly collide with each other and with the walls of the container.

3. There are forces of attraction between particles of matter. These attraction forces will increase as the distance between the particles becomes closer.